This solution is for anyone that has a SQL failover cluster and wishes Reporting Service to be highly available and have failover capabilities. The solution I implemented seems the most natural and how Reporting Services should work right out of the box – but doesn’t. This solution makes Reporting Services highly available (HA) on both cluster nodes with failover capability with zero cost (no additional servers or licenses). Although, it is an uncomplicated procedure there was much learned from the experience along with some interesting load distribution options.

These were active/passive clusters, but no reason why it wouldn’t also work with others.

NOTE: This solution provides high availability but low scalability. As soon as your Reporting Services demands exceed the power of your cluster server/node, you should consider a traditional scale-out deployment with multiple servers using Network Load Balancing (NLB).

As you know, if you install Reporting Services on a cluster, whenever the cluster fails over to the second node, Reporting Services will be down.  When SSRS is down the reporting URL will not be accessible and any missed scheduled report deliveries may have to be reprocessed manually after everything was failed back to the primary node. This probably doesn’t happen often, but when it does it is a pain and it’s frustrating that Reporting Services doesn’t work within a cluster like we expect. This happens because as Microsoft states SSRS is not cluster aware component of SQL. When you setup a cluster with SSRS and then install the second node SSRS will not get installed and if you attempt to install and add SSRS manually on the second node the installer will not allow you.

I was migrating an older SQL 2005 cluster to a brand new SQL 2012 cluster and took the opportunity to research and test a more highly available solution. I discovered all usual posts stating SSRS is not cluster-aware and you can’t make it HA without deploying multiple servers in a scale-out deployment. But I didn’t want to deploy multiple Report Servers and greatly increase our costs. I just wanted Reporting Services to work in my cluster how we expect it should.

Selecting an optimum Reporting Server solution involves weighing costs (for SQL license and servers) along with performance demands and scalability. I found various solutions available to make Reporting Services HA, each with its own pros and cons. Depending upon your needs one of these other solutions may be a better fit for your environment.

HIGH-COST WITH HIGH SCALABILITY
Since SQL 2008, Microsoft has recommended a scale-out deployment – installing Reporting Service instances on separate servers creating a web farm sharing a common Reporting Services database (on the cluster) and adding network load-balancing. This is a common Microsoft recommendation that allows great scalability but requires SQL Enterprise edition for each reporting server you add, which can get expensive.

MEDIUM-COST WITH MEDIUM SCALABILITY
Some people recommend installing a new instance of SQL just for Reporting Services on the second cluster node and join it to the primary node in a scale-out deployment, which also requires an additional SQL Enterprise edition license. Using any combination of SQL Standard edition servers will not allow you share a common reporting database and will present an error that scale-out deployment is not supported (this is why we pay for the expensive version).

I also discovered some creative, less travelled, solutions that provide lower costs. One solution involved dividing the workload between two additional SQL Standard edition Reporting Servers by running only scheduled report distribution on one server and interactive report generation on another (done by setting options in RSReportServer.config on each server). With this solution you can dedicate the resources of two individual servers sized for your workload of your Reporting Services tasks. Another solution involves using two or more stand-alone SQL Standard reporting servers and using merge replication and a few tricks to keep the reporting databases in sync along with NLB. Neither of these solutions scale well beyond two servers.

ZER-COST WITH LOW SCALABILITY
This solution is the focus of this article as it most closely resembles how SSRS should work out-of-the-box on a cluster. This scenario involves installing SSRS on both nodes of the existing cluster and creates HA Reporting Services that runs automatically on whichever node becomes active. However, by default the SQL installer won’t let you install SSRS on the second node unless you follow the instructions below.

Automatic failover for the report scheduling engine works because we have joined the two nodes in a scale-out deployment sharing a common reporting database. We can choose to let Windows Failover Cluster manage the SSRS service failover or run the SSRS engine on both nodes. This option creates some interesting load distribution scenarios which can be found below under the section LOAD DISTRIBUTION OPTIONS.

ADD SSRS TO INSTANCE
We first need to add SSRS to the existing instance. However, when you attempt to run the wizard to install SSRS you run into a fatal cluster validation failure that stops you. According to Microsoft they do not support adding or removing features to a SQL failover cluster. If you forget to install a feature, Microsoft recommends you uninstall the SQL cluster instance and start over again or install the feature by creating a new instance, but no explanation is provided. Neither of these options are what we want. 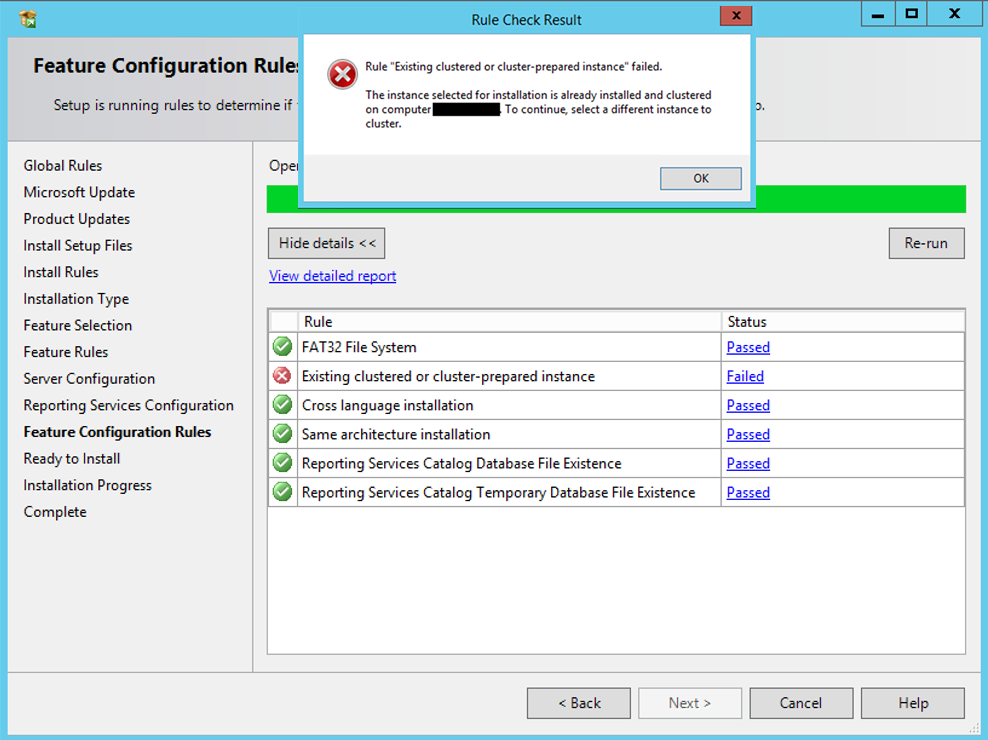 HOW TO INSTALL SSRS ON EXISTING CLUSTER
In order to install SSRS onto an existing cluster, we need to run SQL setup from the command line using a switch to bypass the cluster rule check that the wizard was complaining about.

NOTE: This procedure has been performed by others for many years to add components to an installed cluster and I found no reported problems.

CONFIGURE REPORTING SERVICES
Now we need configure SSRS on both nodes and join them in a scale-out deployment. For the most part, the standard directions for configuring SSRS scale-out deployment are valid. However, note that this reference assumes you are installing SSRS on separate stand-alone non-clustered servers. 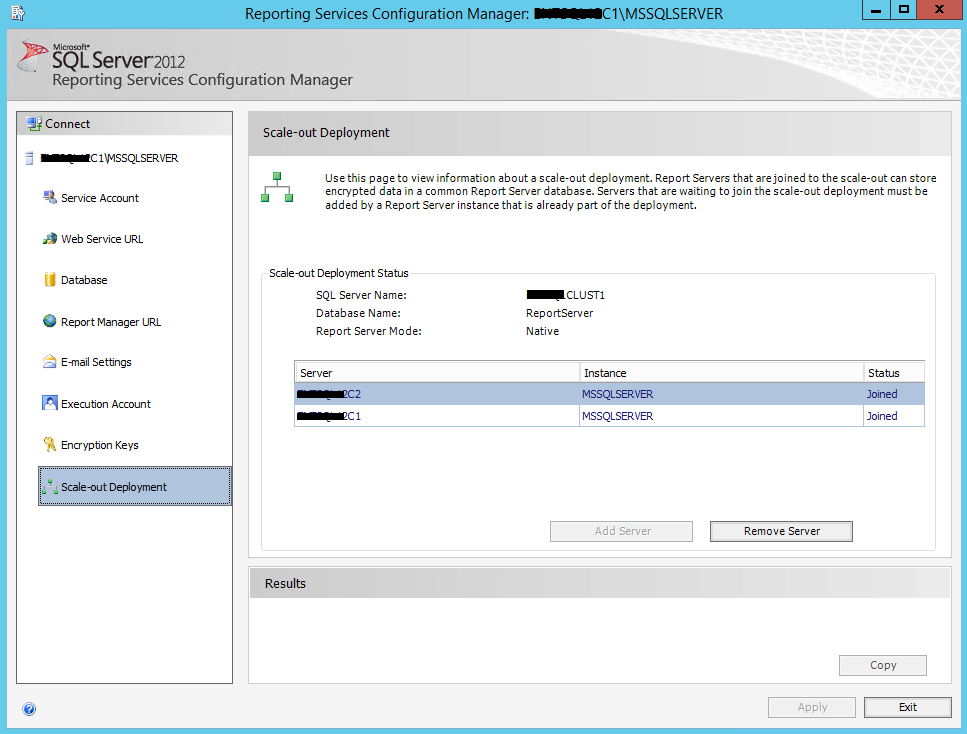 CONFIGURE GENERIC SERVICE
This optional step allows the cluster manager to ensure that SSRS is only running on the currently active node. If you wish to run SSRS concurrently on both nodes see section on load distribution options and important notes on SQL licensing. 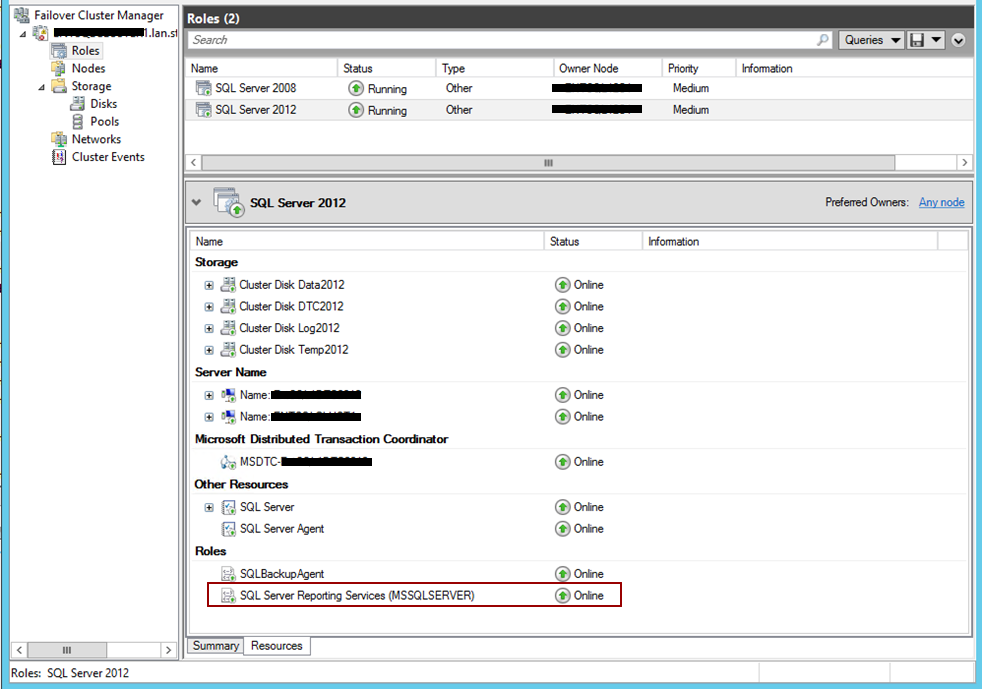 How to: Configure a Report Server on a Network Load Balancing Cluster
https://msdn.microsoft.com/en-us/library/cc281307(v=sql.105).aspx

How to setup SSRS high availability with Standard Edition
http://pietervanhove.azurewebsites.net/?p=513